When social media first started there were Twitter fails and Facebook posts that made us laugh, and seconds later it was forgotten that they ever happened. After all, it was just the internet. With the evolution of a savvier consumer, brands have been given the ability to create a digital consumer-based persona, find influencers and even sell to more consumers worldwide with the introduction of eCommerce.

That said, not all attention is good, especially on social media, and even more so if your brand is the one creating the uproar. Instead of exploring the ways to effectively promote your business online, let’s take a look at a few major brand blunders and how to not ruin your brand reputation online. From top execs to mom and pop bakeries, responsible social media posting does not go without notice.

Let’s get started with the importance of knowing how social media works, even if you are a top-level management executive in one of the most widely used social media platforms in the world.

First up is a brand blunder/user error from Twitter. Twitter’s finance Chief Anthony Noto, made a significant user error on the company platform of which he works.

Clearly a case of direct message failure, Noto quickly removed the tweet, but not before hundreds captured a screen shot, and over 500 people retweeted the information. Why is this so controversial? New user growth at Twitter has significantly slowed in the first few quarters of 2014. While not the worst case scenario for Twitter, it’s still a good example of how easy it is to create a simple mistake that can cause a lot of people to talk.

Making light of national tragedies is one way for a brand to drive consumers away quickly.

In 2013, cooking site Epicurious thought that the best time to promote their recipes site was shortly after the Boston Marathon was rocked by an explosive device. The thread got the attention of several consumers who weren’t afraid to share their distaste. 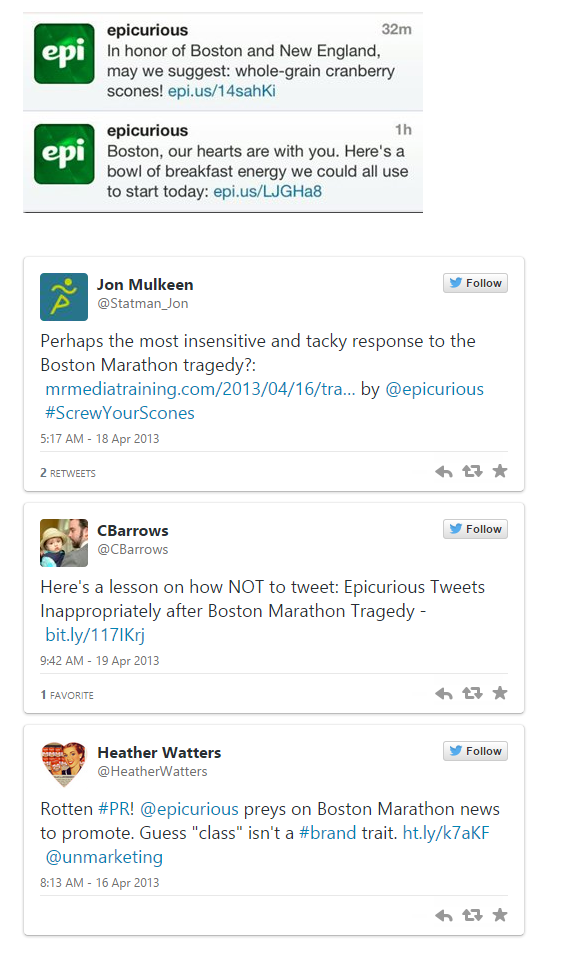 Understanding how engagement works is critical.

Check your hashtags!
Use hashtags that are meaningful for the post, not just one that you hope will boost your own ratings. As you can see below, Kmart’s intention started off good with a sentimental post about the Newton school tragedy, but it quickly lost all meaning when they added a hashtag promoting toys.

People in your community are watching and taking notice to your epic social media meltdowns.
Last but not least, we bring you one of the most highly talked about social media fails ever recorded. In May of 2013, after an extremely anticipated visit from celebrity chef Gordon Ramsey, Amy and Samy Bouzaglo, of Amy’s Baking Company had what can only be called the meltdown of the century. The couple managed to silence Gordon Ramsey and cause him to walk off set during the filming of Kitchen Nightmares. Next, they took  to social media channels at the height of said meltdown. This is quite possibly the worst decision these two could have ever made.

And the responses…well to be fair, it was not going to end quietly.

You can always try to save face, but when it’s gone too far, you’re risking a chance at 0% recovery. 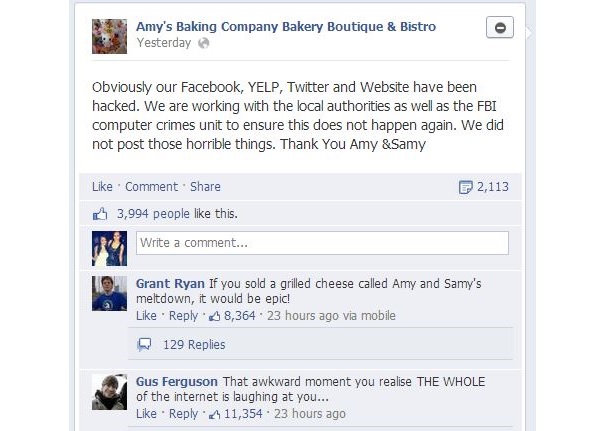 While some of these may seem extreme, they can be used as learning experiences of how not to handle your social media account. It’s important to remember, as the digital age continues to become more sophisticated; consumers rely on the experiences of other consumers and users on the internet. Remember your social media footprint lasts forever, especially once your post is picked up and shared. There is such a thing as social media etiquette. There is also a large difference between the creative and the careless and learning the difference between these two will only prove to make your brand more desirable to the millions of consumers online.