MIT Media Labs won $40,000 by putting together the fastest crowd-sourcing team in the world this past winter. The MIT Media Lab team attributed their deep knowledge of social networking mechanics as being central to their victory, as outlined in a Forbes article about the Red Balloon Challenge. In a nutshell, they made heavy use of crowd-sourcing with a recursive, incentive structure for the social network. By recruiting a strong, well dispersed team with a big focus on sharing the incentive to not only find the balloons but to spread the word and recruit more potential balloon finders, the MIT team was able to generate a Social Network of

It got me wondering – could we all engineer our way to social media success?

So I started doing some reasearch. My first stop was the cyber-anthropology series on Influencers that Dr. Michael Wu of Lithium has been putting together. Social Networks, Communities, the components of Influence and conversational dynamics are all covered with clarity and depth. His blog is a terrific source of insight and inspiration for anyone hoping to understand the deep mechanics of Social Media.

Dr. Wu identifies six key factors contributing to influence in Social Networks; two for the Influencers and Four for the likelihood to be Influenced.

Influencers have two key factors they can leverage:

1) Credibility (expertise in a given domain)

The likelihood of a person being influenced is impacted by four key factors:

All of these factors were prominent in the MIT Media Lab victory. However, the role of incentive for this “campaign” also needs to be considered.

I include the six factors below in parentheses, where applicable:

The DARPA team also identified eight distinct tools for the geo-location problem, meaning how they answered the question, “How do I quickly reach and communicate with a wide, dispersed audience across multiple, social media channels?”

The eight factors were:

6) Dispatching team members as spotters to search or confirm reports

In our work at Philly Marketing Labs, we’ve found that Social Media at the campaign level can be done quite effectively. With embedded incentives, the ability to tap into an area of interest or passion can be driven towards specific outcomes (register for a newsletter, watch a video, make a contribution or find a red weather balloon). In the case of the DARPA contest, several teams used social networking mechanics.

In fact, the MIT win was impressive, but not decisive. Given that the entire contest lasted under 9 hours, eight other teams had considerable momentum and used many of the MIT techniques as well. But given over 4,000 entrants to the contest, the quality drops off pretty quickly. By the 43rd place, the number of balloons reported near the end of the race had dropped to just 2. In fact, the winning strategy was not exactly obvious before-hand. A quick review of some brainstorming of social media strategies before the event shows that while crowd-sourcing was identified as a critical success factor, the idea of how to motivate that crowd was not anticipated in the blog post. Furthermore, the MIT Media Lab’s prominence and influence seems to have played a critical role. 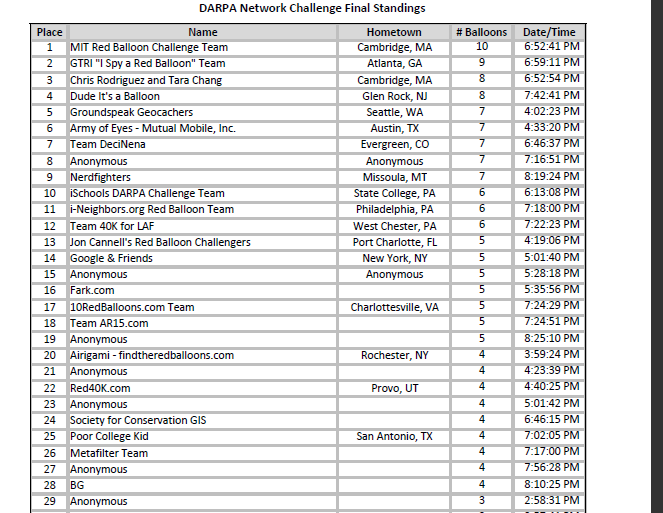 What are some conclusions we can take away for this quick study of the DARPA Red Balloon experiment?  Here are a few takeaways for your consideration.

The top 1% of the contest entrants outperformed the rest by a strong margin. Part of this “quality” has to do with credibility and the attendant reach of the team. Part of it has to do with applying a well-informed strategy grounded in an understanding of the campaign objective and aligning with the available channels.

The prominence of Search strategies combined with Social Media techniques becomes evident in the post-contest analysis. Strong SEO rankings for the recruiting web-sites as well as powerful search tools for scanning Twitter, Social Media and news reports allowed for a broad, pre-contest reach and rapid identification of relevant information during the contest.

The MIT strategy to distribute the winnings maximized incentive for the network members to actively participate.  Bragging rights are nice, but hard cash is better. In fact, the number of man-hours employed to win this efforts likely amounted to pennies per hour of effort. There is a bit of a lottery effect, but you had control over you odds. The more people you helped recruit, the better your odds of winning some cash. The recruiting/bootstrapping efforts via the web site and email outreach reportedly increased the team from an initial 5 to 5,000 in 48 hours, with hundreds of thousands of page views in a very short timeframe.

4) Strategic Use of Technology can help.

While I don’t think the MIT team used an iPhone app, some of the top competitors did. The strategic use of mobile computing can help with this type of geographically based initiative. Thinking about your mission might imply other strategic technologies. For example, voting tools for panels or ideas, video submission tools or bar-code scanning apps are examples of tools that could play a role in distributed or crowd-sourced initiatives.

Understand that this is an example of a very focused campaign-oriented effort. This is very different than building a sustainable, long-term community organized around a common mission or passion. In a community building effort, a number of other factors, like roles in your social networks could be taken into consideration. Food for a future post.

Have you used any of these ideas with success in your Social Media marketing efforts? I’d love to hear from you. Or leave your comments on our analysis to add to the discussion. What did we miss? Do you have another perspective you’d like to share?